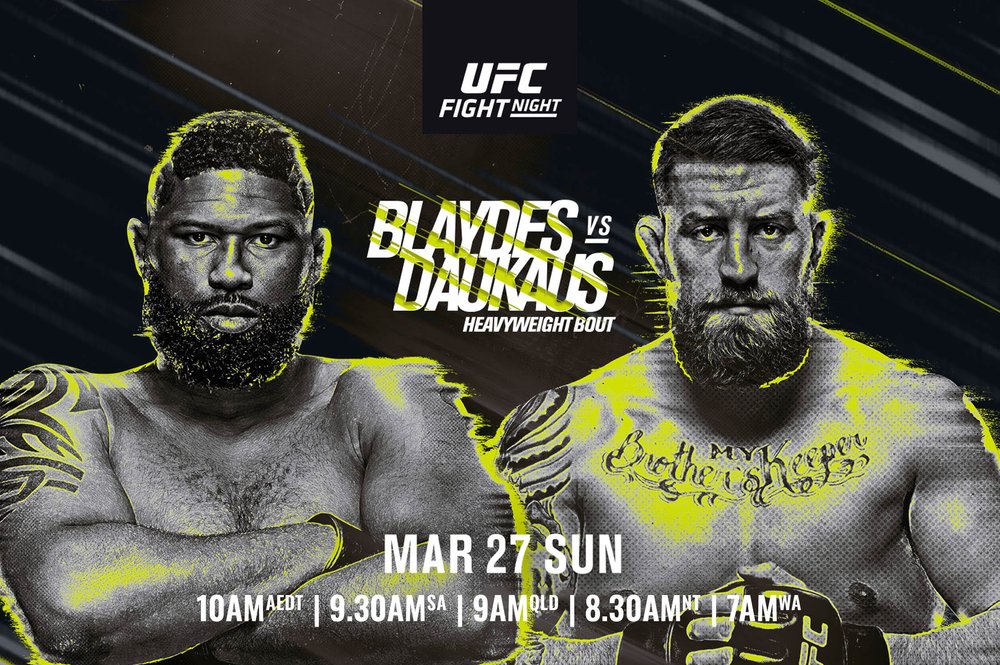 We have a perfect Dana card following an incredible weekend of fights. Only one fight of any importance to the division followed by a ton of low ranked matchups. The UFC absolutely refuses to have 2 stacked cards back to back, if you had an amazing show, the next week is likely going to be a bust. I don’t want to say this card is all bad, we have some pretty close matchups, but man are there some lopsided bouts in this one. Aliaskhab Khizriev is one of the biggest favorites I have seen since I started watching at -1250. Daukaus vs Blaydes should be a good fight to round out the top 5, Joanne Wood vs Alexa Grasso is meh, Matt Brown Vs Bryan Barberena is pure violence 3 years too late, Askar Askarov vs Kai Kara-France likely decides the next title shot, Ilir Latifi vs Alexey Oleynik is meh, Marc Diakiese vs Viacheslav Borshchev is going to be fucking fireworks. Let’s get into these picks.

Curtis Blaydes is one of the least likable fighters on the roster, nobody wants to see a heavyweight wrestle fuck. He is the fighting version of Sisyphus constantly pushing his way up to a top contender fight until he gets knocked the fuck out by a heavy handed hero. Daukaus is not the guy who will get you with one punch, he is a volume striker that moves insanely well for a heavyweight. Blaydes will have a hard time dealing with the speed of Daukaus and will gas out fast on failed takedown attempts and Daukus will pick him apart and win us big money at a nice underdog line.

Man who gives a fuck about this fight? Neither of these girls will get to the top of the division again, competition has gotten too good. Joanne Wood has been on a steep decline for the past few years and Alexa Grasso dominates average competition. This is an easy Grasso by decision move, can’t see any other way this fight goes.

These are fucking warriors. The amount of battles these guys have been through tops everyone else on this card. Ok maybe not Alexey Oleynik. Wish we got to see this when both guys were  a little younger, but at least this will be a standing battle. While I believe Barberena is a lot more durable and crazy than Matt Brown, Brown should have a steep striking advantage. I have a feeling we are going to get some insane highlights and get a split decision by the end of this banger.

Askar Askarov not having a title shot yet is absolutely bonkers. This man arguably beat Brandon Moreno and is undefeated otherwise, and he has to sit and wait to see Moreno Figgy 4. This fight is for him to firmly place himself as the next man up. Kai Kara-France somehow pulling off a win here would put him in line for the title also, coming off 2 very strong wins. If Kai keeps this standing he wins, thing is that he won’t be able to. Askar is going to get this to the ground fast and be threatening submissions the whole time until he finally locks one in.

This one had me back and forth a ton. First I wanted Ilir Latifi by decision, then just over 2.5 rounds, then under 2.5 rounds, then Ilir Latifi by TKO which is what I landed on. Alexey is just way too old and Ilir is too good at grappling to get caught in a sub. Ilir is going to swing for the fences because he’ll want to keep this standing and will eventually catch Alexey.

This fight is violence incarnate. The bone collector has hit quite the rough patch against some top UFC competition and is looking to bounce back against a fighter who is arguably better than both the guys he just lost to. Borshchev has been demolishing his competition and there might not be any better strikers in the whole division. Diakiese is pretty much all striking but not to this level. He will keep it standing and will eventually have to swing for his life until he gets dropped by Borshchev and sent into another dimension.

After absolutely crushing last week, I am not feeling as good about this one. I had to do so many method of victories to get some of these lines down. I also only have like 1 underdog picked, and this feels like a card that will break my heart. I am definitely going to play this one smart and stick to my units (as long as I stay sober). Have a fun night of violence and as always, may luck be your lady tonight!