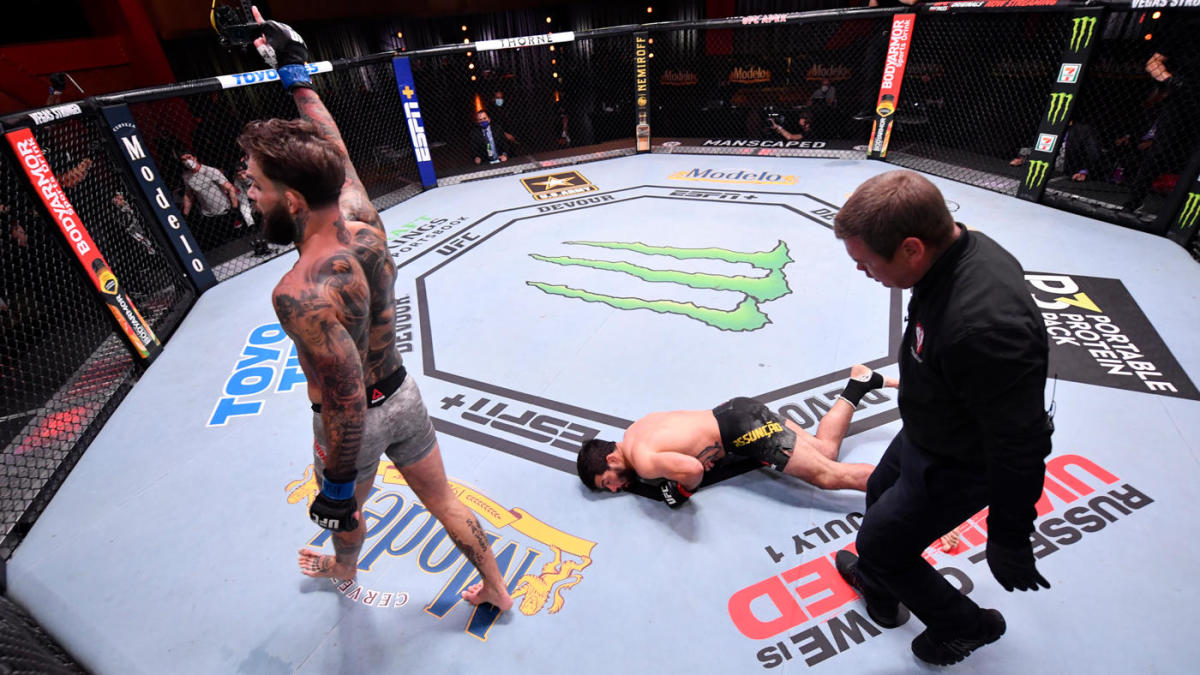 If we have learned anything these last two weeks, it’s that the 25 foot octagon is fucking awesome and should be used from now on. Seven of the twelve fights were finished. The only true boring round of the night was round 5 of the Amanda Nunes v. Felicia Spencer fight, and that was because Nunes was showing mercy and spent half the round laying on top of Spencer just killing the clock. I am almost at the point of being ok with every event being in at the Apex with no fans. Maybe it’s just been a small sample size, but it’s been great so far. I hope they at least bring the small octagon to Fight Island. The bantamweight division had a great night that showed a path to crowning a new champion in the wake of Cejudo’s retirement. Some undefeated prospects lost their 0s. UFC 250 delivered a solid slate of fights.

HERBERT BURNS. It’s been a hell of a week for the Burns family. Shit, it was a great two consecutive fights between last Saturday night’s main event and last night’s opening preliminary fight. Gilbert dominated Tyron in the main event last week. He warned us his brother was a really good grappler, and Herbert showed us Gilbert wasn’t lying. Herbert rushed Evan Dunham and immediately took his back and got the rear naked choke win. It was Herbert’s biggest win yet. He looks like a real threat for the featherweight division.

ALEX PEREZ. Alex Perez has quietly amassed a 6-1 record in the UFC. That one loss was a TKO loss to Joseph Benavidez. He’s been on a 3 fight winning streak since then. Last night was against the second best fighter he’s faced, Benavidez was the best, and Perez showed up and looked great. He barely broke a sweat. I would say you barely ever see leg kick TKOs, but we saw one last week too. But man, to take out one of the best flyweights ever with leg kicks is just impressive as hell.

MAKI PITOLO. I made fun of his nickname, “Coconut Bombz” before the fight. I mean, he spells it with a ‘z’. He controlled the 1st round and tired Byrd out. Came out for the 2nd round and threw his trademark bombz. Started with body shots that just killed Byrd. It was good work to start the round and 1 minute into the round Byrd was done. Pitolo power translated well at middleweight. Further proving that fighting at your natural weight can be beneficial for your career.

CODY STAMANN. What an emotional roller coaster of a week for Stamann. Started with the death of his brother. Then he punctuated it with a completely dominating fight against a surging Brian Kelleher. Stamann looked great on the feet. He picked Kelleher apart. Then he dominated Kelleher on the ground, and Kelleher is a very good grappler. It was just a very good performance for Stamann. Bantamweight is stacked and I don’t know where he falls in the division, but he is someone that will make some noise there.

IAN HEINISCH. Before last night, only one person had TKOd Gerald Meerschaert before, Thiago Santos. That’s pretty good company for Heinisch to join. Heinisch was on a 2 fight skid and needed a big win. It took him only one minute and fourteen seconds to get that big TKO win. After the coronavirus scare almost got this fight cancelled, he must be very happy that he was able to step into the octagon. By far his best fight in the UFC.

DEVIN CLARK. Clark’s gameplan played out perfectly. He swarmed Menifield and did not give him many opportunities to land a big shot. Menifield was gassed in the first round and never recovered. Clark is pretty good and had a good fight. He definitely exposed Menifield’s gas tank, that everyone knew was garbage. Menifield lost his undefeated record, one in which he finished all of his wins. Menifield needs to work on his cardio. His takedown defense was really good. Even though he was absolutely gassed in the first round, he wasn’t taken down until the middle to end of the third round. But Menifield needs to diversify his fight game to more than throwing bombs and defending takedowns. Just my fat guy couch opinion.

ALEX CACERES. Caceres showed he is a UFC veteran. He put an absolute beating on Chase Hooper. He couldn’t put Hooper out, but that wasn’t for him not trying. Caceres fought very intelligently. Caceres could have pounced and tried to finish Hooper, but Hooper definitely has the advantage on the ground and might have caught Caceres in a submission. Caceres’ stand up was crisp and he just kept piecing Hooper up, and his takedown defense was excellent. Caceres put on a solid veteran performance and stopped the hype train. Might have been too much too soon for Hooper.

BRIAN KELLEHER. Sometimes good things are meant to end. This was Kelleher’s first UFC fight to go the distance. Some good things don’t end, it was still an entertaining fight. Boom delivers. This was Boom’s third fight of 2020. He fought Hunter Azure 3 weeks ago. To make that turn around is great. This coronavirus world is weird. The sports world is even weirder. The UFC was very smart to start up quickly. Being the first sport going got more eyes on them than ever before. They’re definitely taking advantage of the situation. Kelleher fighting twice in 3 weeks is his way of taking advantage of the situation. He is on the prelims, so he has been fighting on ESPN, getting a lot of eyes on him. If he doesn’t have a medical suspension, and a slot opens up in the next couple of weeks, don’t be surprised to see him step up.

CHASE HOOPER. For a 20 year old that got absolutely worked by a long time UFC vet, Hooper showed some toughness. He ate a lot of shots and kept going forward. He knew he was going to have to initiate grappling. Unfortunately, Caceres was just better at keeping Hooper away from him. I’ll give Hooper credit for taking a beating and not giving up. He is 20 and is going to have to pretty much grow as a fighter in the UFC. His striking needs a lot of work. But he showed if he can put it together, he can make a run.

FELICIA SPENCER. If moral victories won championships, Felicia would be the featherweight champion. She’d also have a win over Cyborg. Not many people have gone the distance against Amanda Nunes. In the UFC, only Valentina Shevchenko (twice), and Germaine de Randamie have done it. Valentina is/GDR was a UFC champion. So that is something. Nunes is an absolute beast. So Felicia surviving the 5 round beating she took is just impressive. Well, the 4 round beating. Nunes showed mercy in the 5th round and took Felicia down and just held her down for 2.5 minutes. The featherweight division is so thin that this fight was too soon for Felicia. Felicia has a good career ahead of her, but she probably could have used a few more fights before fighting Nunes.

I HOPE THEY PAID HIM WELL

EDDIE WINELAND. The opening fight of a PPV is meant to set the tone for the card. For UFC 250, they chose Eddie Wineland and Suga Sean O’Malley, and it was the perfect choice. Wineland is a brawler and loves violent fights. Suga has insane footwork and feints. He caught Wineland so badly that Wineland completely dropped his hand and Suga put him to sleep with a walk off KO.

RAPHAEL ASSUNCAO. Like Wineland, Assuncao is one of the better bantamweights in UFC/MMA history and they have both been very hard to KO/TKO. Unfortunately for Assuncao, Cody Garbrandt looked like his old self. Then a second before the bell sounded for the end of the second round, Cody landed a vicious hook that sent Assuncao into next week.

WALK OFF INTO THE SUNSET WITH 50K

SUGA SEAN O’MALLEY. Suga Sean is on a mission. His footwork and feints are crazy. Wineland is a longtime veteran. He was a WEC bantamweight and Suga just fooled him with his movements. He faked a body shot, and Wineland’s hands dropped and then Sugar landed a devastating blow. Suga didn’t need to pounce for the finish. It was beautiful.

CODY GARBRANDT. Garbrandt has had a rough 3 fight stretch since winning the title against Dominick Cruz. That fight against Cruz was incredible. He followed that up with 3 straight KO/TKO losses. He needed a rebound win here. He looked cool, calm, and collected; like the old Cody Garbrandt. His hand speed was there, it was great to watch. As the second round was closing, he had his back up to the cage. He was looking at Assuncao, saw an opening. Ducked and let Assuncao swing, then took the opening and landed a vicious shot that put Assuncao face first on the mat for the KO win.

ALJAMAIN STERLING. When Cejudo retired and vacated the belts, I thought Sterling v. Sandhagen should have been made for the title. Not only did they not make it for the title, it wasn’t even the co-main event of the night. Aljo needed to make a statement in this fight about that snub. He definitely did that. He came out firing and immediately jumped on Sandhagen and took his back. Then got the rear naked choke in 1.5 minutes. It would be a crime if his next fight isn’t for the bantamweight title.

AMANDA NUNES. There is no woman in the UFC at 135 or 145 close to her skill level. It is pretty crazy. She absolutely dominated Felicia Spencer for 4 rounds. She showed mercy in the 5th round and took it easy on her. Nunes showed her gas tank and dragged the fight out. She laid into Spencer landing over 130 strikes. She landed 6/7 takedowns and controlled Spencer on the mat. Nunes is just too good for anyone and there doesn’t seem to be challenger left for her.

FIGHT OF THE NIGHT